These are the world’s best MBA programmes in 2018

There is a new leader at the top of The Economist’s latest ranking of the world’s best full-time MBA (Master of Business Administration) programmes.

Northwestern University’s Kellogg School of Management has overtaken the University of Chicago’s Booth School of Business to clinch pole position, while Harvard has climbed one place to number three.

Kellogg graduates have one of the largest alumni networks in the world, 97% find a job within three months of graduation and have an average salary of $123,998, according to The Economist. 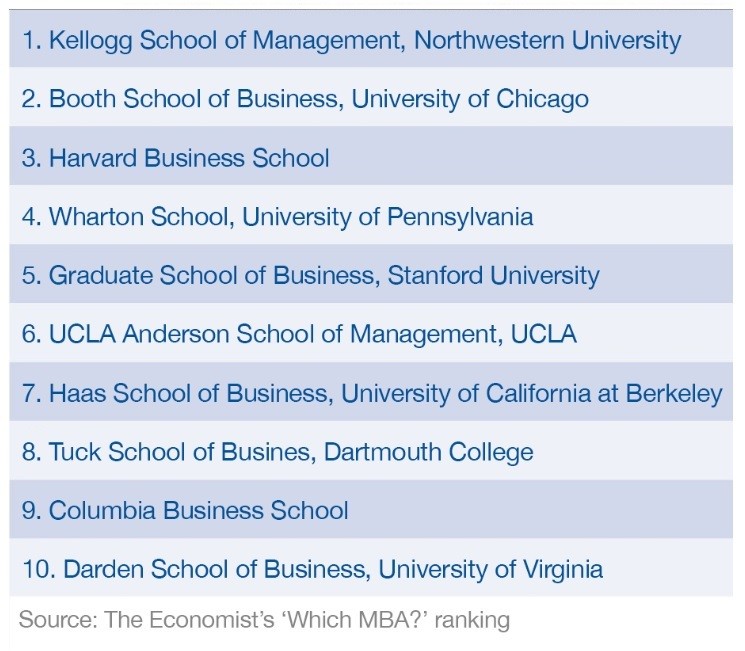 All of the top 14, and 16 of the top 20, positions in the ranking are taken by US business schools. The highest-placed institution from outside the United States is France’s HEC Paris, which fell six places to 15th.

The fast-climbing Wharton School at the University of Pennsylvania, a member of the Ivy League, moved up eight places from number 12 in 2016 to fourth position.

The Economist says all of the top 10 spots in its ranking are now taken by “large, prestigious American schools”, for which students are prepared to pay a premium. Tuition fees for these schools have increased rapidly with students paying $134,600 on average.

When it comes to earning potential, having an MBA can make a significant difference.

While Kellogg graduates received an average 72% pay bump on pre-MBA salaries, graduates of France’s HEC School of Management enjoyed a 147% increase. By comparison, those at the UK’s Warwick Business School got an average rise of 44%.

But, as The Economist points out, studying for an MBA isn’t just about improving your salary. So it ranks the programmes based on four categories: opening new career opportunities (35%), personal development and educational experience (35%), better salary (20%) and networking potential (10%).